Description of the outbreak

On September 20, 2022, the health authorities of the Republic of Uganda declared an outbreak of Ebola disease caused by Sudan Ebola virus (SUDV), after a case was confirmed in a village in Madudo County in Mubindi District, central Uganda on September 19.

As of October 26, 1844 contacts were under surveillance in nine regions of the country. A cumulative total of 3166 contacts were included since the start of the outbreak, of which 1194 (37.7%) completed the 21-day follow-up period.

A total of 94 safe and dignified burials (SDB) have been performed since the beginning of the outbreak, of which 97.9% (n = 92) were community burials. 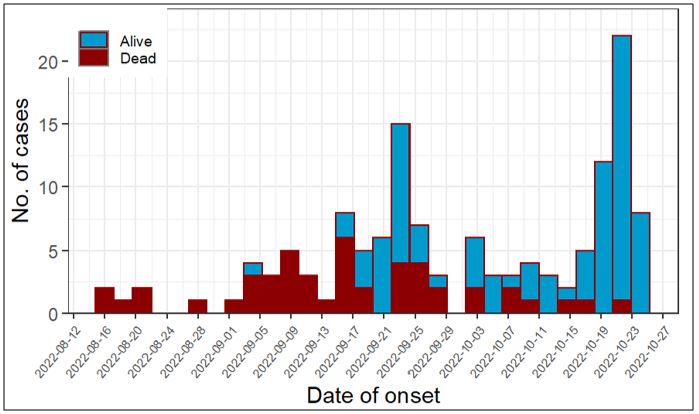 Table 1. Number of confirmed (confirmed and probable) cases and deaths of Ebola from SUVs, by region and sub-county, as of October 26, 2022. 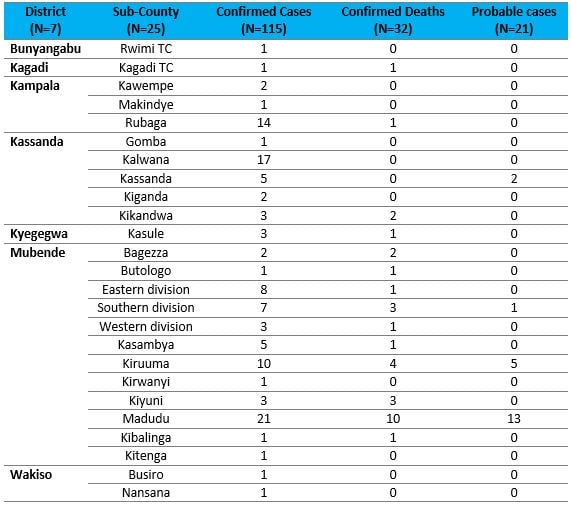 Figure 2. Map of confirmed cases and deaths from Ebola from SUVs, by region, as of October 26, 2022. 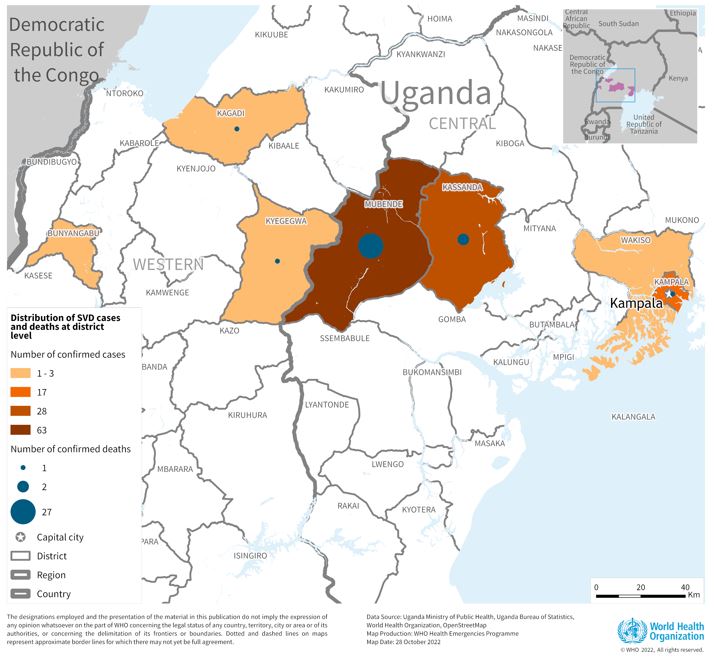 For more information on the public health response in Uganda by the Ministry of Health, WHO and partners, please refer to the latest case reports published by the WHO Regional Office for Africa: https://www.afro.who.int/countries/publications?country=879

The World Health Organization has begun international consultations with vaccine developers to identify candidate vaccines against Sudan Ebola virus which can be tested in randomized clinical studies in Uganda. There are three candidate vaccines under study: cAd3, cAdOX1, and rVSV SUDV GP. Clinical study protocols are subject to review by Uganda’s ethical and regulatory committees.

At each stage of the clinical study, the WHO Priority Setting Committee will review the evidence collected on the efficacy and safety of candidate vaccines to inform response activities.

The Ministry of Health of the six neighboring countries (Burundi, the Democratic Republic of the Congo, Kenya, Rwanda, South Sudan and the United Republic of Tanzania), in-country and international partners, and the World Health Organization are supporting Sudan Viral Disease (SVD) preparedness measures. These include activation of the multisectoral coordination mechanisms of the SVD; Refresher training for rapid response teams; refresher laboratory training; activation / strengthening of community monitoring systems for the SVD; community participation and risk communication; Enhance Points of Entry (PoE) and assess and enhance case management capabilities, among other activities.

Countries are required to move operational readiness activities to subnational levels in high-risk regions/states to stop introducing SUDV into their communities. A new online readiness assessment tool for measuring KPIs has been developed to identify and document readiness capacity functions in several high-risk areas in Uganda and the six neighboring countries of Uganda to facilitate real-time monitoring of the actual state of readiness.

In addition, readiness will be jointly assessed by external stakeholders in these six countries. Joint Assessment Missions (JAMs) assess readiness at the national level as well as at the level of high-risk regions/states. JAM reports will give an accurate picture of preparedness capabilities across all pillars and in all subnational regions at risk.

WHO is developing a community preparedness checklist to support early detection and local containment by strengthening community surveillance and preparedness actions in border areas and communities in neighboring countries.

Uganda has experience responding to an outbreak Zaire Ebola virus And the Sudan Ebola virus The necessary actions were quickly initiated. The current outbreak is the first outbreak Sudan Ebola virus In Uganda since 2012. In the absence of licensed vaccines and treatments to prevent and treat SVD, the risks of potentially serious public health effects are high.

On September 21, 2022, the World Health Organization assessed the risks of this event as high at the national level and low at the regional and global levels. The WHO Rapid Risk Assessment (RRA) will be reviewed in the coming days based on available and shared information; However, given the geographic expansion of SVD spread in urban areas, the risk could occur at the present time It is rated very high at the national level, high at the regional level and remaining low at the global level.

When the case is identified, early initiation of supportive therapy has been shown to significantly reduce mortality from SVD.

WHO advises against imposing any restrictions on travel and/or trade to Uganda based on the information available for the current outbreak.